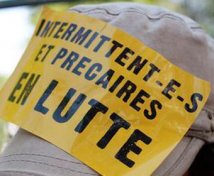 France - They want to keep us precarious, we will stand inflexible!

European Labor Action Day for the Right to Unemployment Insurance.

European governments have found their answer to  « the crisis »: War on the poor.

In France, the socialist government has given avail to a convention by which 2 billion euros will be saved, (to the detriment of their unemployed)

In Italy, Matteo Renzi, has created a Jobs Act in which precarious jobs become the norm.

In Belgium, as of January 1st 2015, thousands of unemployed workers will be excluded from the unemployment insurance system whilst the reform to the « statut de l’artiste » will render the whole of the cultural sector precarious.

In Germany, the reform brought to the Hartz enactment, aims to silence any questioning as to the arbitrary of administrative decisions.

In Portugal, since the 2011 restrictions on the right to access, 8 out of 10 workers are not being compensated when unemployed.

92% of all new jobs created in Spain are precarious and under paid.

What we are seeing is that if they are leading a war against the unemployed, it is in fact to attack workers as a whole.

Since Tony Blair imposed a back to work policy unto his unemployed via the rules of his workfare, and since this model of action has been refined by Germany’s social-democracy, we are now well informed on how a reform to unemployment insurance can become the leverage by which the workforce as a whole is destabilized and by which the onset of a drop in salaries is provoked.    We also know how some left-wing parties can become the executing agents of the neo-liberal agenda.     The downward slide of unemployment compensations as well as the increase of authoritative control measures seek to insure the acceptance of any job at any price, even at no salary at all.   In sight, the German model for full precarious employment at a low salary : while the unemployment level in Germany is at 5,4%, 25% of the workers are poor, life expectancy is also decreasing: a record for inequality in Europe. Since the Hartz laws, the net salary has decreased by more than 4%.  Pretexting the crisis, our leaders point the finger at the unemployed accusing them of « living above their means » whilst they themselves are finding ways to massively tax evade, the oligarch dictate their laws according to a well organized process: stigmatization campaigns (« they are not looking for work » « we need to control »), soon followed by measures by which unemployment benefits are either lowered or abolished.   The above is accompanied by incessant bureaucratic and political bullying - measures which force the workers to accept increasingly underpaid jobs: mini jobs, German style; zero hour contracts, English style. What we have to look forward to: a vocational training under the SMIC level for long term unemployment, a process being studied right now in France.

Their main objective is to attack all forms of employee protections, giving favor to the employer (the Labor Code, Minimum Wage, Labor Relations Board, Collective Labor Agreements) Their secondary objective is to transform unemployment management into a lucrative market for the Insurance sector. As it already is with temporary employment agencies and firms which specialize in training for employments which don’t exist.

European wide measures and strikes are being held on this day, November 14th.  Today we take action so that all workers can receive rightful compensation when unemployed, we fight to defend the principle which underlays a mutual benefit unemployment insurance. Today we take stand for the right to a sustained income when faced with the lack of sustainable work. We stand today to remind you of the individual’s right to a real livelihood.

We want to fight for another kind of society than one of poverty and precariousness for the masses. We want solidarity, allowing us to live in the present and to think of the future.