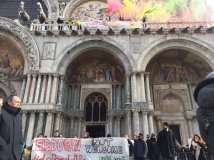 «Erdogan not Welcome!». Occupied the roof of Saint Mark Cathedral in Venice

The Turkish President Recep Tayyip Erdogan is in Rome to pay his visit to both Italian and Vatican institutions. He will meet Paolo Gentiloni (Italian Prime Minister), Sergio Mattarella (Italian President of the State), Pope Francis I and the Vatican State Secretary Parolin. The goal of this meeting is the breach through the political isolation on part of Turkey following the recent invasion and attack of the Kurdish city Afrin.

In the past days Erdogan addressed Italy with friendly words and hinted that a stronger dialogue with this nation could be useful to speed up the entrance of Turkey into the EU. Erdogan know how to play his cards: he leverages the key role played by Turkey within Middle-East by refusing to negotiate over the war he provoked against Afrin and by securing European borders from the East side. On top of that, Erdogan wants to keep his word with regard to commercial and economic agreements with Italian enterprises, of which it is important to recall Impregilo, Leonardi, Pirelli, Snam, Ferrero and Astaldi.

Moreover, Erdogan will have “ the honor” to meet Pope Francis I, the issue of the conversation being the future of Middle-East countries such as Palestine, the nomination of Jerusalem as capital city, the lives of refugees and humanitarian aids. «I reckon this visit as a chance to draw attention over common human values, friendship and peace messages»: those were Erdogan’s words spoken in Instanbul on Sunday afternoon before taking off toward Italy.

According to the Turkish President Jerusalem «has to be preserved as a city where Muslims, Christians and Jews can live at peace, side by side, as affirmed by Onu resolutions», because it is the only way viable to solve out the conflict between Israel and Palestine.

What could seem schizophrenia is in reality a very calculating scheme: he opens his arms to talk about peace and to welcome differences, he confesses to be worried about growing islamophobia in Europe, he condemns the recent racist event occurred in Macerata, but his hands are dirty of blood. It is blood belonging to civilians who died under bombing in Afrin. It is the blood of those injured during protest marches against the Turkish government and of those who are suffering in State prisons. It is blood spilled from Kurdish martyrs who died to defend Rojava.

Here it comes again an overused slogan: «exporting peace and democracy with a war», that is, a war against Kurdistan.

Rome has been completely jammed since days: special corps lined up on the field to guarantee Erdogan’s safety, off-limits areas and preventive, non-sense clearances of neighbourhoods. More than 3500 policemen are at disposal, almost the same quantity of people deployed in the days of the 60th anniversary of Rome treatises last march. The thing is that last year the “political Chiefs of State” were thirty, right now it is only Erdogan.

In Venice the association Ya Basta! Edi Bese! occupied the San Marco basilica in response to the call to action.

In a press release it provided it’s written that the members participated to the action because «they want to oppose Erdogan’s presence and those who legitimate him». They hold that «Erdogan is liable for thousands of deaths in Turkey and Syria, for the imprisonment of hundreds of activists and journalists, for the repression of free speech and critical thought in Turkey».