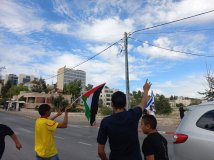 Road to Palestine, day 2 - In Sheikh Jarrah it seems like home

From Europe to Palestine, fascists act in the usual way: wishing you rape protected by the police. The story of another afternoon of resistance in East Jerusalem.

The date is the usual every Friday for the last ten years. Sheikh Jarrah. The East Jerusalem neighborhood from which Israeli ultra-right-wing settlers want to kick 28 Palestinian families out of their homes. Among them is the one in which Yacoub Abu Arafeh, a teacher and theater actor born 60 years ago, has been resisting the occupiers' attempts at legalized expropriation and violence for 50 years.

In the small living room of his home, surrounded by those already expropriated, he tells us how he is resisting the Occupation.

A year ago Sheikh Jarrah had become the beating heart of the Palestinian resistance, with mass protests culminating in massive bombings of the Gaza Strip. At the end of February of this year, the Israeli court suspended the evictions, a ruling that did not, however, end the settlers' threats and provocations to families.

And that is why demonstrations continue. A child's refrain sung over a megaphone announces the arrival of the residents at the gathering, where several soldiers await. Among them, a group of young and adult Israeli activists accompany "Free, free Palestine," one of many choruses chanted together by the crowd, with the drum.

The settlers' provocations are not long in arriving, but their pattern of action reminds us of something: it is that of fascists from "home." Escorted by the Israeli Police, they infiltrate inside the march, chanting slogans and threats, even going so far as to snatch a Palestinian flag from the hands of a protester. The response of those in the crowd was mostly ironic, with an elderly woman mocking them by waving a flag that they were unable to pull away.

Meanwhile, Israeli soldiers are translating the insults the settlers are hurling at us: "Nazis," "get raped by Arabs," and "askenazi kibbutzin," which in Israeli society is equivalent to "radical chic."

An insult that certainly does not sound new to us. The many children and young boys respond compactly and consciously, but nonetheless in their own way, that is, with jeering gestures and laughter. 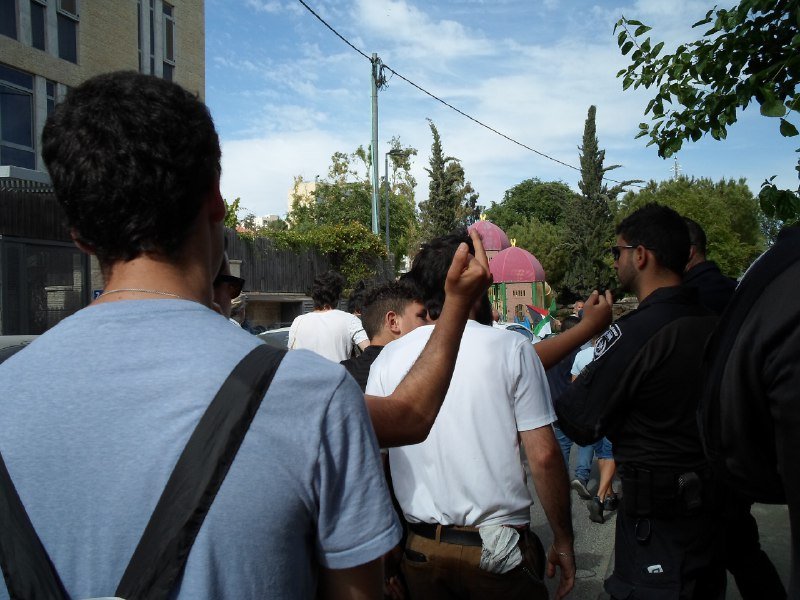 During the demonstration we also meet Shula Treves Jarrach, a 23-year-old Italian-Israeli woman who in a very spontaneous way explains why every Friday she too finds herself demonstrating in Sheikh Jarrah, almost as if it were the most natural thing in the world.

Hearing us speak Italian, Sharon Bamberger also approaches. She tells us about her mother, who fled to Jerusalem from Mussolini's '38 racial laws that prevented her from going to school. Now she takes to the streets against fascists that wave the Israeli flag.

As we write, that wall we glimpsed in the distance yesterday now towers above us: we are entering Bethlehem.