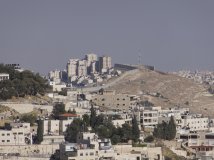 The map drawn on the wall of the hostel shows the old city divided into different colours, with the sacred places highlighted.

Around the walls, the names of the gates are those that you may find in ancient history books that tell of when Roman legionaries conquered Jerusalem and destroyed King Solomon's temple in 70 AD.

Today only the western wall remains, the Wailing Wall, one of the holiest places in Judaism. A footbridge leads to the Esplanade of the Mosques, where the Dome of the Rock and the Al Aqsa Mosque are located. From here the prophet Muhammad is said to have set off on his journey to heaven. Which is why it is the third holiest site in Islam (after Mecca and Medina).

Outside the circle of walls of the old city, the Mount of Olives overlooks the Garden of Gethsemane and the Tomb of Mary. Together with the Holy Sepulchre, they were the crusaders' justification for conquering the city in 1099, 'wallowing in blood up to their knees' according to the chronicles of the time.

And even today, the holy places of the three monotheistic religions become fuel for new conflicts and persecutions. In 2000, Ariel Sharon's provocative visit to the esplanade of mosques started the second Intifada. Today, the site continues to be at the centre of tensions.

A sign at the entrance of the footbridge leading to the esplanade, signed by the Chief Rabbi of Israel, warns Jewish believers that "in accordance with the law of the Torah", they are not allowed to enter that place, which is the former temple of King Solomon. But according to substantial factions of Israeli religious nationalism, the time has come to demolish the mosques and rebuild the temple. A prospect that would explode the anger that is brooding under the skin.

On the streets, we notice throngs of large cameras and an army of Israeli policemen and soldiers, many of them very young, guarding a 'normality' at first glance, made up of small shops selling symbols of the three religions and tourist spots where Palestinian children work while a few steps away, their Israeli peers, dressed in their best, participate in religious ceremonies or go to 'museums' to watch propaganda videos.

In the room that constitutes a branch of the 'Museum of Independence', in the old Jewish quarter, a video, composed of testimonies always and only from the Israeli side, narrates the 1948 battle for control of the quarter as an inexplicable aggression of 'Arab gangs' against the Jewish population forced into a heroic defence until the surrender to Jordanian troops followed by the destruction of the quarter itself until the Israeli occupation in 1967.

The Palestinians do not exist, their expulsion (Al Nakba) does not exist, it is not known whether or not the Jewish fighters were natives, and even the leadership of the fledgling state of Israel is essentially criticised for accepting an armistice in 1949 that divided Jerusalem in two. A perfect example of a historical narrative whose sole purpose is to justify the erasure of the other.

But that is not all. One can use history as a tool to physically erase the other, to tear down their homes and force them to leave. This is what happened to the Palestinian families whose homes, just outside the ancient walls, were demolished to make way for a nascent archaeological park. "The City of David. Where it all began" say the signs.

We do not know whether the foundations of ancient buildings that we see emerging from the ground really date back to the time of the biblical ruler. But the propaganda message is clear: 'We were here first, we are back here and we will stay here forever'. The ensuing practice is brutal: expel those who are not considered part of that 'we', from the 'historical' narrative to ethnic cleansing, the road travelled by all nationalisms.

Beyond the walls of the old city you can glimpse 'the Apartheid Wall'. This is what is known as the 710-km-long barrier that the State of Israel has built to separate the territories it has taken over from those left (for how much longer?) to the Palestinians. Its eight metres high it is massive, but the places in the old city from which it can be glimpsed are very few: only a careful observer can spot in the distance that cement line between the high-rise buildings. Even the motorway route from Tel Aviv to Jerusalem does not allow one to see it, and while we wonder if this is intentional, we cannot help but notice the constant presence of Israeli flags along the road.

After all, even the disturbing presence of the police and army is not exhibited when it is not deemed necessary. The same pattern was enacted upon our arrival at Tel Aviv airport. The constant passing between lanes and turnstiles, the carrying out of unnecessary paperwork for Israeli citizens who are instead reserved preferential lanes of passage, took place in an apparently demilitarised context: few army and police forces were encountered during the disembarkation phases, even fewer than those encountered at the departure airport. Instead, the meticulous checking of our passports and the assessment of our legitimacy to stay in the territory where we had landed was scrupulously carried out by the civilian personnel employed. An increasingly refined control system in which bureaucracy weighs as much as weapons.