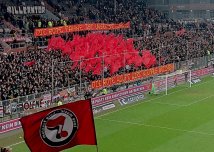 Banning the Rote Hilfe: the plan of German Interior Minister

The Rote Hilfe is the most enduring and effective anti-repression movement in Europe, and anyone who has ever been to a rally in Germany and interacted with their legal team can testify to that. Born in the 1920s in opposition to Nazism, it has been the emblem of Solidarität for a century, a principle extremely dear to militant - and not - German activism. For about two months now, German Interior Minister Horst Seehofer has been threatening to dissolve the network, «the fastest growing extreme left-wing movement on German soil», by declaring it outlawed. For a complete frame of the situation, and the possible implications of this gesture, we interviewed Silke, activist of the RH and militant of IL Heidelberg.

1. According to several newspapers, the German inner minister, Horst Seehofer, plans a ban against Rote Hilfe (Red Aid), the largest anti-repression movement in Europe. What are his main reproaches against your organization?

One of the main problems for the German government and especially of the Ministery of the Interior is that we are a fast-growing leftist organization uniting all kinds of social movements in the common fight against State repression. At the moment, we have about 10,000 members: Apart from people that belong to antifascist, feminist, anti῎capitalist and climate groups, there are also well-known politicians of socialist and communist parties organized in the Rote Hilfe, as well as trade unionists and members of different political and social organizations. One of our major activities is supporting activists who are arrested, accused or sentenced. We give legal advice and prepare their trials with them, we pay for their lawyers and flank all kinds of State repression with press releases and protests.

Our work also includes supporting political prisoners in Germany and abroad, and we fight the oppression of leftist Turkish organizations and the Kurdish movement in Germany. Moreover, we launch or join campaigns against stricter laws, police brutality and the abrogation of basic rights.

The reproaches of the inner minister seem completely ridiculous: first of all, he scandalizes the fact that we support “criminal offenders” - which is our core function as a solidarity organization. As the State criminalizes leftist activists for minimal infringements (or for no reason at all), nearly everyone who joins a demonstration might end up as a “criminal offender” in the definition of Horst Seehofer.

He especially focusses on our financial support for people who are accused after the militant protests against the G20 summit in Hamburg in 2017 as well as on our publicity work in these days. Threatening an anti-repression organization with a ban because of supporting people facing repression and because of criticizing police brutality is grotesque – it seems as absurd as forbidding lawyers to defend the accused. Another even more ridiculous reproach that has been used against Rote Hilfe for years is the imputation that we support the militant Rote Armee Fraktion (RAF) – an urban guerrilla that has been dissolved twenty years ago…

2. What are you doing and planning to do?

At the moment it is unclear if the ministry is really taking any concrete steps. During the last years, different right-wing politicians have demanded repressive measures against Rote Hilfe, and several well-known politicians experienced shit-storms because of their membership. For decades, the secret service – Verfassungsschutz – keeps an eye on us and gathers information that is used in denouncing our work.

Anyway, the news from the Ministry of the Interior seem quite alarming, and we have to take them seriously. But in reaction to Seehofer’s threat, dozens of solidarity statements of different leftist parties and politicians, of artists, socialist organizations and movements were released, which was a great support for us and an important signal to the government: if there really are any concrete plans, there will be massive resistance. Even JUSO, the youth organization of the social democratic party (SPD) which is part of the government, a clear statement in solidarity with us. Most media reports were rather critical towards a ban against Rote Hilfe and quoted from our press releases, showing that there are no reasons at all for criminalization.

3. Such possibility seems to perfectly fit the worrisome scenario that is spreading in Germany (and Europe too): I'm thinking, for instance, to the far-right rally in Chemnitz this summer. A scenario that has a clear precedent in history, during which the Rote Hilfe was effectively shut down. This is in fact the second time in history RH is threatened: can you trace coincidences – mutatis mutandis  – between this phase and the early 1930s?

During the last years, there are not also regular racist demonstrations, brutal attacks against refugees and leftist people, growing right-wing movements and parties like the AfD. In Germany, there have also been several scandals showing that there are networks within State institutions that openly support Nazi groups. The Nazi terror network NSU was able to murder at least ten people and commit several bomb attacks with dozens of injured migrants – under the protection of the secret service. In many cases, Nazi groups have been warned by police officers before raids. And just a few weeks ago, a putschist network was uncovered that is mainly formed by former special forces members with best connections into German institutions.

Regarding these facts, we are facing with a strong right-wing movement that has conquered even key positions – a situation which reminds of the early 1930s when the Nazi movement got growing sympathies and gained more power. Many media have remarked that the last time Rote Hilfe was banned was in March 1933 – only a few weeks after Adolf Hitler had become chancellor. Horst Seehofer would clearly put himself in a fascist tradition.

4. A significative feature of RH is, I think, the communication and the spreading of contents. The movement not only helps the victim of State repression from a legal, social and economic point of view, but also tries to sensitize, to raise awareness, even to "train" the common sense and the society in general. I'm thinking about your booklets, above all the WTWB translated in many European languages. Often, they deal with laws clearly explaining controversies, implications and possible practices of resistance. Since two years ago another important left-wing contents' contributor, the open publishing network Linksunten.indymedia.org, was shut down, do you think that there is also an aim at silencing this kind of information?

During the last years, Rote Hilfe has become a relevant part of public discourse on so-called inner security. We vehemently criticize the growing possibilities of police on the one hand and the restrictions on personal freedom on the other hand. It seems a bit absurd that we as a clearly antagonistic organization are the ones to defend civil rights that are guaranteed by the constitution but threatened by the government.

All forms of radical criticism are a thorn in the State’s side, and it tries to silence it. A few weeks after the G20 summit in Hamburg in 2017, the leftist publishing platform linksunten.indymedia.org was shut down, and several media activists face a trial these days. The government explained this open attack against the freedom of the press by referring to several proclamations for the demonstrations in Hamburg that had been published on linksunten. So the main accusation against the platform is informing about the protests from a sympathizing point of view.

The militant protests against the summit have been used for legitimizing all kinds of breaches of laws. Several activists have been condemned to prison just for being part of a group of demonstrators – without any prove for their active involvement in militant actions. The special task force of Hamburg police has published hundreds of photos of activists who are only suspects – a real online pillory. It is obvious that the militant protests are used as a universal weapon in an aggravated fight against left-wing opposition.

As the Rote Hilfe is a loud voice against State repression and the attempts to curtail civil rights, it is vital for the government to silence it. And as the Rote Hilfe organizes practical solidarity for those who face those repressive measures, we are an obstacle in the general attack against social movements.

5. We can't mention the far-right rally in Chemnitz without reminding of the huge reaction among the population: see the counter-protests (in Chemnitz, but also in München few days later), the WirSindMehr response and so on. More in general I also think about the extraordinary participation to the SeeBrücke campaign this summer – expressly in opposition to Seehofer positions –, and to the similar experience elsewhere in Europe. It seems that also among non-activists the awareness is rising. Have you collected solidarity from a wider range of population that is not usually linked to your activities? And what from non-German movements?

The broad solidarity movement after Seehofer’s threat against Rote Hilfe shows that there are not only growing right-wing tendencies. As we can see after the massive protests against the new police laws – especially in Bavaria, but also in other Federal Lands – people are aware of the repressive development during the last years, and they are ready for resistance. Some of the really grotesque measures against leftist activists, the many breaches of law by police and justice and the Nazi scandals of the last years have lead to massive criticism. We hope that there will be growing awareness for this problem, and that the solidarity movement that has formed will also have an eye on State repression.

After Seehofer‘s attack, hundreds of people joined the Rote Hilfe, and we are growing from day to day. This shows that the idea of solidarity is spreading – in the antiracist movements of SeeBrücke and WirSindMehr as well as in Rote Hilfe.

If the German government really takes concrete measures against Rote Hilfe, it is an attack against solidarity as such and against all progressive movements. In this case, we need support from all over the world by protests in the streets, solidarity statements and publicity of all kinds.

But you can also support us now: by joining us symbolically, by informing other people about the threats against Rote Hilfe and by building up solidarity groups internationally.