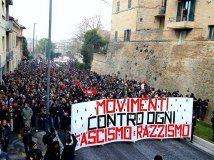 «Time for liberation and insubordination». Over 30.000 people march in Macerata (Italy) against all forms of fascism, sexism and racism

Thousands of people from all over the country reached Macerata on Saturday 10 February for the massive demonstration against all forms of fascism, sexism and racism called by several Italian social movement organisations. On 3 February 2018, Luca Traini had carried out a drive-by shooting targeting black people across Macerata’s city centre. After injuring six, Traini gave the Nazi salute in the main square of the city, while waiting to be arrested. Traini was a far-right militant and a local elections candidate with the xenophobic party Northern League.

The shooting took place in the midst of the electoral campaign for the Italian general elections. One could have expected that a right-wing terrorist attack would have favoured the left, but the response by the centre-left Democratic Party (currently leading the government) was so weak and aligned to the discourse of the anti-immigration right that the actual outcome might well have been the opposite.

While the Italian openly fascist parties Forza Nuova and Casa Pound explicitly supported the shooter, the Northern League leader Matteo Salvini said that immigration was to blame for Traini’s actions. The declarations by the Democratic Party’s Minister of the Interior Marco Minniti were strikingly similar to those of Salvini. Minniti, in fact, claimed that the shooting proved his policy of blocking boats carrying migrants from the Mediterranean Southern coast was correct. As if it were not enough, Minniti supported the stance by Macerata’s mayor (also a member of the Democratic Party) against the planned antifascist demonstration and declared that it would not be authorised by the authorities. Following this, Italy’s largest trade union confederation, CGIL, as well as the association of the ex-partisans (ANPI) and other groups tied to the centre-left, cancelled their participation to the march. However, these groups quickly faced a rank-and-file rebellion within their own ranks, while the social movements that had called for the demonstration declared their intention to march with or without authorisation. This forced the authorities to lift their ban, less than 24 hours before the march.

The irresoluteness of the centre-left against fascism (bordering justification) and its active opposition of militant antifascism proved that it is unable of providing a barrage against the rising tide of racism that threatens the country. Thus, tens of thousands of people took the matter into their own hands by showing up in Macerata, while solidarity demonstrations were taking place in several cities in Italy and even abroad. Locals in great numbers took part in the protest, bucking the portrayal of a «locked, secured and hostile city» as depicted by the mainstream press. Despite the scare tactics and the political threats by Minniti and the like, Macerata lived through a multitude that chose to state its own indignation and independence, reactivating democracy from the bottom-up.

The comrades of Macerata’s Sisma Social Centre, who were the first to sense the anguish – as well as the subsequent feeling of collective liberation – of these tense days, declared: «Sometimes history becomes denser, it flows so fast that it becomes hard to perceive all the events. In Macerata, this last week taught us the importance of being fully part of this history, without stepping back from our responsibilities». Paolo, an activist of the Marche Social Centres network, stated during the protest: «A huge amount of people have taken to the streets, despite the authorities’ attempts to impede the march, despite the bogus electoral tactics of the great organisations of the ‘left’, subordinated to the Democratic Party. What happened last week was a fascist shooting on migrant women and men and all that followed it prompted us to declare this demonstration. We took this decision to say out loud that we are antiracists, because we believe that only social solidarity among the subalterns who suffer from this economic system constitutes the power that can change the world. Only social movements with a real presence on the ground can change reality. Dear Minniti, your attempt to reduce us to silence has failed. The new insubordination of these days is an extremely powerful thing».

There were also several speeches by members of the ex-partisan organisation ANPI. Over the last days, these rank-and-file ANPI activists resisted the attempt by their own organisation to sabotage the march. The feminist campaign Non Una di Meno has also intervened to underline the importance of connecting antiracist and antisexist struggles. Karim Franceschi, who fought ISIS in Syria with the Kurdish YPG, made a connection between the surge of the far-right in Italy and Erdogan’s attack against Afrin.

Saturday’s demonstration was a huge victory for at least two reasons. First of all, despite the defections of the institutional “left”, it has been the most appropriate reaction to the political forces that are riding this racist climate of fear and hindering those who want to fight it in the streets. Moreover, this was a collective victory, built by the many unbowed grass-root organisations who kept launching appeals to demonstrate despite the threats by the Ministry of the Interior.

It was built by the many who refused to give in to the diktats of those who wanted to impose “surrender from above”, and also by the many citizens of Macerata that have rescued the legacy of the city by taking part in the organisation of the protest. We demonstrated that antifascism is still a mass-based social force that has to be reckoned with.