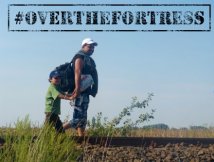 #overthefortress, a handover to the border of fortress Europe

For weeks, we follow closley the evolution of migration in Balkans.

We wanted to see with our own eyes the reality of entire peoples who move searching a possible future: for this we have already organized two trips to Serbian-Hungarian border, and we were in Budapest when it began the #freedommarch.

Our experience makes useless all semantic categories: the stories that we collected, the looks crossed, the deep determination and dignity of those who have walked on tracks and on highways, have left us an impression so deep that we can not define.

So we want to start an “endless journey” made up by small but stable and spreaded attendances, in order to testifythe hardness of daily reality of those who travel for months, and carry a small but concret help, with the contribution of many networks of cooperation over the borders.

With this trip we will exceeded the borders of balkan States, making the act which nationalist tendencies in Europe would make it impossible.

For years we support the need to open safe humanitarian corridors, today we reapeat it togheter with the need an asylum law which must be unique in Europe and unconditional. We know that the first reception is not everything: the fall of each barrier mustfollow by an effective support programs in every country of destination. This is why even in our territories we will not be distracted by the rambling speeches of xenophobic people, like Beppe Grillo, Matteo Salvini and his shameful faction, neither by the echoes of nationalist right that from UK to Hungary do nothing but promote hate and identity closures. What concerns us are the new walls erected to blockade the road to find another possible life, to dignity and to freedom. We are horrified in front of decisions taken by Viktor Orbàn, Hungarian Prime Minister, who announced the militarization of the border with Serbia, already closed by walls and metal grids, and by Macedonian government announced the fortification of the border with Greece.

14th and 15th September will be two days fulled not only by simbolic meanings but also by consequences that could be devastating. On September 14th the migrants emergency will be the focus of an extraordinary summit of European Union: on the one hand the German government have questioned the Dublin Regulation (?), although it is unclear how, taking a leading role to face the arrival of 37 thousand of refugees in the first week of september (450 thousand since the beginning of the year), on the other hand we can already imagine that the summit will define which people are entitled to refugee status, the further distribution of migrants and a greater european obligation of expanditure for deportations and in the fight against trafficker.

On 15th September will occur the first anniversary of the assault of the fascist-fundamentalist ISIS (Daesh) in Kobane, and the beginning of the Kurdish resistence in Rojava. The same day Orbàn announced the definitive closure of Serbian border.

Tuesday, wile we will be in Roszke, the comrades of Rojava Calling will take in the streets of Suruc our proximity to sister and brothers of YPJ/YPG.

This handover feeds on the amazing and surprising solidarity we have seen in Vienna trainstation or in #carsofhope, the spontaneous mobilization of the Viennese who, in defiance of the prohibitions of Austrian and Hungarian governments, last Sunday have crossed the Hungarian border to rescue people on the way.

We go to Balkans to bring to the new Europeans from every continent our #Welcome!