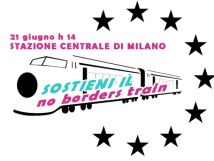 Milan, saturday June the 21st. Our Europe has no borders. A train to violate European border

No border train. 2pm. From anywhere in Italy to Milan Train Station and beyond European borders

This is the nth “migration emergency”, with thousands of people who escape wars and violence, and arrive on the Italian coasts. It brings, as usual, all its corollary of violations, illegitimate praxes, exceptions to rights, hypocrisies and exploitations. This is happening in the southern sea, where people still die, despite Mare Nostrum, as well as at the internal borders of Europe that entrap thousands of people in the first country of arrival. The same is for the “plan of extraordinary emergency” of the Italian government, that is a new opportunity for making money on migrants’ back. This is a scenario that the result of the recent European elections risks to worsen, transforming Europe into a real battle field, where borders play a fundamental role. Those who arrive today on the Italian coasts are escaping violence and persecutions. For this reason, we claim the necessity of putting into place the only possible solution to prevent deaths at sea and the exploitations made by smugglers: the activation of patterns for authorized and safe arrivals in Europe. Still, both the European and the national institutions keep quiet about this. But journeys across the sea are not the only context in which migrants are forced to challenge the European borders. Indeed, another odyssey starts for them as soon as they arrive in Europe. For those who remain in Italy, the mechanism of the reception put in place by the Italian government can grant only months of waiting and a profiteer state aid, that worse by the fact that, once again, the official channels of SPRAR have been bypassed, and refugees have been “distributed” to the best offering.

It is not by chance that thousands of refugees who have been abandoned by the institutions of this country are forced to occupy buildings as the only possibility for having an accommodation, while the Italian government, through Minister Lupi’s decree, wants to deprive them also of the right of residence and of consumptions. This is the reason why, in order to establish and to conquer from below the rights that others still deny to the refugees, we propose to set a network of support. A map with the places and the contacts available for those who move for getting to other states, and for those who stay in Italy and risk that their asylum claim is rejected or for those who live in abject conditions, waiting for knowing about their future after the 30th of June, when the agreement between the ministry and the hosting centres will come to an end.

But today the issue of asylum and migration interrogates immediately, as never before, also Europe, its geometries, states’ egoisms and our possibility of building a European space not dominated by austerity, precariousness and exclusions. The majority of the migrants who come to Italy want to move away and go to other countries. But while in Europe goods and finances circulate freely, borders block, divide and select people, thus revealing all their hypocrisy. In this way, thousands of refugees are deprived of the right to choose, and forced to be entrapped in Italy or to pay handsomely jackals who are making money taking advantage of Europe’s rules.

On the 26th and on the 27th of June, the European Council will meet in Brussels in order to discuss about borders, patrolling and new operative rules. During the same days, in the Belgian capital will arrive the “refugees’ march” to which we will take part along with hundreds of migrants and activists from across Europe. Shortly after, on the 11th of July in Turin the leaders of EU member states will meet to discuss about youth’s unemployment. This official agenda is also the occasion for all movements to build up together a programmatic agenda of struggles and conflicts, of battles and shared patterns, to continue to develop and carry on a European movement of transformation.

For this reason, we invite all to challenge the European borders along with migrants and refugees who are entrapped in this country. Since, what is happening in this country around the borders that divide Italy from France and Switzerland from Austria necessitates a prompt response. For putting an end to the violence of the border, for supporting the march of the refugees and for actualizing what is stated in the Charter of Lampedusa, since the borders of Europe are part of our precariousness; and today more than ever, when freedom of movement is questioned also by the citizens of EU member states.

Let’s support the no borders train. In order to stop the injustice of borders. We invite everybody to come at the central station in Milan on the 21st of June, at 2pm, through small and big caravans, and then to leave by train towards the European borders, and violate them collectively, in the light of the sun, in many people, claiming our Europe without borders, along with migrants.