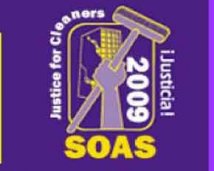 (da edu-factory.org) Students and allies at the University of London’s School of School of Oriental and African Studies (SOAS) have occupied the university today to protest against managers’ attacks on migrant workers. Nine cleaners from the university were taken into detention after a dawn raid by immigration police on Friday. Five have already been deported, and the others could face deportation within days. One has had a suspected heart attack and was denied access to medical assistance and even water. One was over 6 months pregnant. Many have families who have no idea of their whereabouts.

The cleaners won the London Living Wage and trade union representation after a successful “Justice for Cleaners” campaign that united workers of all backgrounds and student activists. Activists believe the raid is managers’ “revenge” for the campaign.Immigration officers were called in by cleaning contractor ISS, even though it has employed many of the cleaners for years. Cleaning staff were told to attend an ‘emergency staff meeting’ at 6.30am on Friday (June 12). This was used as a false pretext to lure the cleaners into a closed space from which the immigration officers were hiding to arrest them. More than 40 officers were dressed in full riot gear and aggressively undertook interrogations and then escorted them to the detention centre. Neither legal representation nor union support were present due to the secrecy surrounding the action.

Many were unable to communicate let alone fully understand what was taking place due to the denial of interpreters.SOAS management were complicit in the immigration raid by enabling the officers to hide in the meeting room beforehand and giving no warning to them. The cleaners were interviewed one by one. They were allowed no legal or trade union representation, or even a translator (many are native Spanish speakers). The cleaners are members of the Unison union at SOAS. They recently went out on strike (Thursday 28 May) to protest the sacking of cleaner and union activist Jose Stalin Bermudez.Protest against the deportation of SOAS cleaners The occupation has issued a list of demands to SOAS management: 1. We call on the directorate to request the secretary of state to immediately release the detainees and to prevent the deportation of the three cleaners who are still in detention in the UK.2. For the directorate to release a public statement condemning what has happened to the SOAS cleaners and calling for their immediate release and return.3.

To campaign for the return of the cleaners who have already been deported.4. To bring all contract staff in house. SOAS should not use contractors, ISS or others.5. To keep immigration officers from entering campus under ANY circumstances or other forms of collaboration with immigration or police. Universities are for education not for state violence and oppression.6. A year's wage as reparations for all detained and deported staff.7. To hold accountable SOAS managers who were complicit in facilitating the raid and detention of the cleaners, refusing to aid a sick worker and a pregnant woman.8. To reinstate Jose Stalin Bermudez, the SOAS UNISON branch chair.9. To respect the right to organise in Trade Unions unimpeded.10. To provide space and resources for a public meeting to build support for the SOAS 9 and other migrants, in education and beyond, affected by immigration control and racism.11. Amnesty for all those involved.

One of the detained cleaners today stated, “We’re honest people not animals. We are just here to earn an honest living for our families. SOAS management are being unfair.” Joanne, one of the occupying students said, “Universities should be sanctuaries: places free of violence and aggression. SOAS’s reputation as a university has been tainted today due to the complicity of state brutality in the arrest of the cleaners.”Graham Dyer, lecturer in Economics of Developing Countries and SOAS branch chair of lecturers’ union UCU, said: “Our fight has united lecturers, staff and students and has rocked SOAS management. Those managers are now lashing out.“It is a disgrace that SOAS management saw fit to use a seat of learning to intimidate migrant workers.

This is their underhand revenge and we will do all we can to stop migrant workers paying the price.”The campaign to stop the deportation is supported by Tony Benn, MPs John McDonnell and Jeremy Corbyn, film director Ken Loach, and many trade unionists and student activists.John McDonnell MP said: “As living wage campaigns are building in strength, we are increasingly seeing the use of immigration statuses to attack workers fighting against poverty wages and break trade union organising. The message is that they are happy to employ migrant labour on poverty wages, but if you complain they will send you back home.

It is absolutely shameful.”Ken Loach said: “This raid is the action of a bully. Migrant workers are amongst the most vulnerable – poorly paid and far from home. Recent action by Unison to secure better wages and conditions at SOAS was good news. Now we wonder if the SOAS cleaners are being targeted because they dared to organise as trade unionists.”The current occupation is a reflection of broad outrage against these actions by all sectors of society. This raid is widely seen as a continuation of current trends to remove immigrant labour and to maintain impossibly low wages.Cleaning contractor ISS used the same tactics against tube cleaners that went on strike with the result that key activists were deported. The use of immigration law is bering used for union busting.