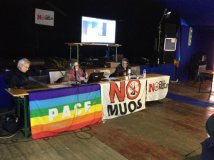 From Vicenza to a new global movement against war

The report of the international conference against war and military servants, held at the Presidio No dal Molin Saturday, January 14

«To create networks we have to consider the technical difficulties of the net(work)»  some people  joke at the meeting’s table. Clearly there are some problems of connections: we’re talking about a global meeting about war that connects activists, intellectuals and journalists literally from every part of the globe, except Oceania (whose oceans have been, indeed, touch by many speeches), starting  from a tent in the middle of a field covered with snow. The historical “Presidio No Dal Molin” has been rebuilt for fifteen days, and, after the opening, has hosted on Saturday afternoon The Global Meeting on war and on military presence.

«Ten years after Prodi said yes, we are again in this place where our fight against the building of the military base has started» Francesco Pavin, an historical anti-military activist opens the meeting.

The numerous audience, mainly composed  by those who built and lived the place day and night, from winter to summer, is made of more than a hundred people under the tent. A tent, with its kitchen and its stage, that was re-built to create discussion and to organize people, with the aim, on one side to  connect all the environmental committees and on the other side to talk about war as an instrument of capitalist accumulation and political abuse.

Pavin’s speech starts from an observation: military operations never stopped and in the last years they also lost that rhetoric that connects them to the war against terrorism and the silence that usually covers them. How can we otherwise explain the agreements stipulated from USA and Europe with dictatorial regimes? How can we explain the increase of military bases, researches and industries? To answer these questions we can look at the concrete experiences of the participants at the meeting.

Corazon Fabros and Michael Bevacqua talk about two of the countries in which American military presence has never stopped from being wide and inconvenient.The Trans-Pacific Partnership among eleven Asian countries and the United States weighs on numerous islands and territories. The first activist explains the situations of the Philippines, where within 2020 the 60% of the American aircraft carriers will be transferred. From Oikinawa, many of these ships will have to be re-collocated in order to ease the US with the trainings and trials that are forbidden by their legislation. They will be able to do that, thanks to the advantages given by that juridical hybrid that the military bases represent abroad, where both the national law of the country of origin and the national law of the occupied territories are effective. The second activist recalls the information about the Philippines to confirm the strategic investments made on the Pacific, always seen as an outpost to supervise Russia and China, highlighting the specific situation of Guam. 29% of the Mariana Islands are covered by military bases: even though they are part of the American jurisdiction they have no right to be represented in the Congress.

Remaining on the area, Hawaii Island are also strategic for the American influence on the Pacific, as Loohan Paik tells us. Missiles, mines, detonators are placed all along  the coasts of the island affecting the marine ecosystem. The sound waves of underwater explosions compromise the life of dolphins and whales, destroy the  barrier reef and the natural protections of water. The routes of military ships departing from the bases in the Hawaii cover and control an area which is three times bigger than Russia, touching India, Chorea, arctic seas and the entire length of America.

During the meeting, also emerges the point of view  of the area that the military operations damaged the most: the Middle East.

By hearing the voices of activists as Selay Ghaffar about what happened in Afghanistan and Turkey, we have a clear image on how the US government is only interested in affirming the NATO’s influence:  they keep closing both eyes on the behaviours of local governments in terms of Human Rights.

American bases on the territory of Middle East and North Africa are very important for the US and NATO; such important that diplomacy is defended even in tragic cases: Amy Holmes, professor of the American University in Cairo, tells us that we have to consider all those geopolitical relationships especially when we look at the impunity that surrounds the death of Giulio Regeni. Even in this case, the anti war movements and the military presence of the US are deeply felt. In Turkey we can see how all these movements have a stronger impact if they can involve also the civilians workers at the bases, that can be able to organize strikes and protests.

Constantly pushing militarization has always been a US’ need. For this reason, it will be vital at the beginning to understand Donald Trump's forthcoming geopolitical moves and then to protest against his warlike decisions. Writers and activists David Vine and David Swanson show us an unstable picture of the US situation: initially, the only candidate that supported unconditionally the war system was Hillary Clinton (with several allegations from Trump), but now even the Texan seems to back up the military positions.

In his entourage Trump surrounded himself with people from the Army and the Intelligence, people who would easily open fire towards Iran and invest on F-35 airplanes. Besides, military industry’s lobby holds an independent power and  weights strongly on the President of the United States’ decisions. On the same line we also find the CIA management, deeply addressed with an offensive attitude especially towards Russia in this new phase of the Syrian situation.

Military investments on bases and trials have increased and costs are now exaggerated especially for the regular American tax-payer; so mobilizations against this decisions are numerous and participated. In Nevada, a big demonstration  promoted by the group Code Pink, as Toby Blomè says, acts against a factory and a trial’s center that works on drones, the same ones that were used for the first time in Afghanistan in 2001. Drones are questioned because they are becoming more and more a technology only used to control the populations in the Middle East, thanks for their ability to kill a target at any time with only evidences based on racial prejudice instead on truthful information.

And Italy? Antonio Mazzeo, talking about the base of Sigonella in Sicily, reveals the American reasons behind the Muos.

From Sigonella airplanes leave/depart  heading to the Donbass and Libya, making the Italian island one of the strategic sites of the Mediterranean Sea.

The new Minister of the Internal Affairs, Minnitti, is the right person to maintain the relationships with the American and European Intelligences, adjusting the Italian position to their military interests, especially during the period of the Italian presidency in G7.

Roberto Cotto, senator member of Movimento 5 Stelle and a historic Sardinian pacifist, describes the constant pressure made by the lobby of the military industry towards the institutions.  Usually manufacturing companies of weapons and bombs play on the cliché that wants the NATO to be the decision-maker regarding the Italian investments in this field. The truth is that those companies are the same ones that pushed the NATO to choose the peninsula as place for the bases.  Considering the absence of offensive threats from other countries, we can’t otherwise explain the constant production of weapons as the F-35, made to transport nuclear , but by looking at it through the eyes of a producer.

Italian military industry has connections in every political sphere, from the defense committee of the Senate to Army generals, that until few years ago, once retired, they were reallocated in the boards of the same industries. That’s why, the battle against war must target and damage figures like Finmeccanica, that keeps financing and developing interests in military field.

Activists Francesco Lodovici and Fabio D'Alessandro both explain the situation in Sardinia and in Sicily.

The first island hosts 170 bases, it means the 60% of military state property, and it is the landmark of the military industry, because it gives the space for trials and departures for the extra European missions. The students' committee against the militarization found a strong support in the young people that made them able to improve their organization and to protest against the military interests on the Sardinian territory.

After, we hear No Muos'  testimony from Niscemi; in Sicily. They identify the contradictions of every military action in the war system, in the climate changes worsen by the missions and the bases and in the fight towards migrants. All those factors taken together can be interesting and compelling in order to restart the anti-war movement.

With Antonio Mazzeo, Fabio  suggests to discuss about G7 in Taormina and about the role of Italy.  How can we create a global platform that connects all these experiences? How can we create an argument  common to all the military situations that goes against them?

Activists say that regarding this point we must be very clear, not to fall in unacceptable  contradictions, like the support to Assad and Putin's wars.

The proposal is to open a contact list and a platform for all the anti-war committees, in order to organize an international and global day for the actions against war.

During the next weeks the pacifist topic will be central: starting from the 16th of January in Vicenza with the march around Dal Molin base and then on the 20th-21st of January  we will have two days full of actions against the major building projects/works  in Vicenza and Trump in Washington D.C.

The conference closes almost at 19 and immediately the preparations for the dinner will begin . Presidio No Dal Molin is living again as intensely as during his first days  ten years ago, but the story is different. It’s not a commemoration or a nostalgic remembrance, but the continuation (o another step) of the fight against the war system.