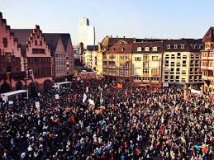 * 25.000 participated in the colourful Blockupy demonstration for a Europe of solidarity

The Blockupy alliance regards the action day in Frankfurt as an important day of protest against the European policy of impoverishment. Despite the massive deployment of police and numerous attacks on protesters, 6.000 people closed in on the European Central Bank and blocked it in the morning. 25.000 people participated in the colourful and loud demonstration to express their desire for another Europe and their rejection of the German crisis policy.

The high level of participation on a regular working day encourages and obliges the Blockupy alliance to continue with the preparation of future actions. Whether these will take place in Frankfurt, Brussels or Berlin is still subject of discussion.

Likewise, the alliance criticized single actions not meeting Blockupy’s action consensus taking place in the morning of March 18, which were neither communicable nor responsible.  Blockupy stands for demonstrations and disobedient actions that do not endanger people, do not escalate and are open for everyone to participate in.

Blockupy announced a thorough evaluation of the events and experiences of March 18 and a discussion of these within the movement to draw consequences for future actions. In order to do so, the alliance relies on solidarity, communication and self-organization of activists instead of the frequently demanded distancing. Accordingly, Blockupy considers the

participation of 25.000 people in the demonstration in the evening of the action day as a joint answer to this.

The alliance criticized the attempts of the federal government, a number of politicians and the media to depoliticize and instrumentalize the conflicts in Frankfurt: while complaining about the violence in the streets, they distract attention from the legitimate rage against the violence of the crisis policy pushing millions of people into poverty. Blockupy also rejects the attempt to criminalize civil disobedience by the police that talks about 4.000 criminals at the blockades on Wednesday morning.

According to Blockupy, about 200 protesters were injured on Wednesday, 50 of them by the use of police batons. Most other injuries were caused by tear gas. One women had to spend the night in the hospital. The alliance furthermore demands the immediate release of an Italian protester who was taken into custody.

Voices from the Blockupy Press Conference on March 19:

Eberhard Heise, participating in the alliance as an activist of Attac: "The way in which German politicians behave like primary school teachers towards the democratically elected government in Greece is intolerable. With this, they try to justify a policy of impoverishment that aims solely at securing capital investments and success in the local competition for investment. We no longer endure the social catastrophes caused by this: forced evictions, closure of hospitals, mass unemployment, drowning refugees. This policy destroys people’s lives and devastates whole states. The resistance against it has now reached Germany – the very country which authoritatively applies this ruinous policy.”

Jennifer Werthwein, representative of the Green Youth within the Blockupy alliance: “Those 25.000 people from all over Europe in the streets of Frankfurt are a strong symbol showing that the policy of Chancellor Merkel has failed. The mandated austerity creates great resentment also within our society and drives many people to the streets. We call for the politicians to take the motives and demands of the people seriously instead of disputing nothing but violent forms of protests.”

Hannah Eberle, representing the Interventionist Left within the alliance: “6.000 courageous and determined activists in the blockades during the morning and 25.000 people in the demonstration: despite the justified criticism regarding single actions,overall this was a great picture of solidarity and collective action. European resistance has finally arrived in Germany, and it is here to stay. Frankfurt has taught us that resistance against the deadly austerity policy needs to be continued and intensified.”

rederic Wester, representing the Ums-Ganze-alliance at Blockupy: “This day of action indicates the large degree of discontent towards European capitalism. The protests have shown that even in Germany growing social inequality leads to social unrest. The political conflicts produced by the crisis cannot be solved by police. We need a fundamentally different solidarity society. We will continue to protest in the streets to achieve our aim.”

Thomas Occupy, a representative of the Occupy movement at Blockupy: “There were some actions that ran counter to the action consensus. But if one considers the inhumane policies of the European Troika as a shining example, one must not be surprised by this anger.”

The press conference was also attended by the Frankfurt-based theater manager and director Willy Praml, who had made his theater available as a meeting point for Blockupy activist: “We criticize the violent acts that have overshadowed the protests and cast the positive Blockupy activities in a negative light. Nevertheless, we stand in solidarity with the movement and will continue to support the Blockupy alliance in the same way as we did during the last two days.”